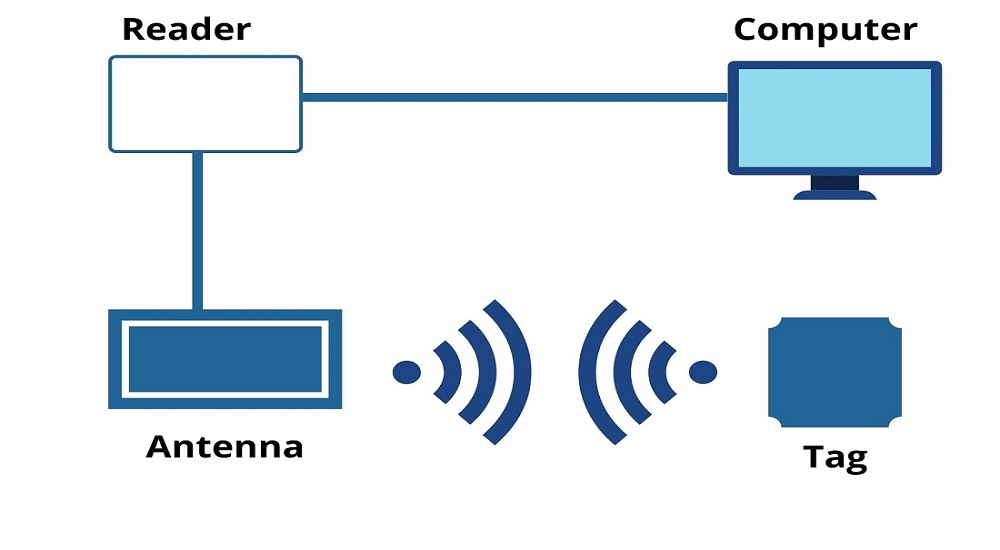 How does RFID work: Science & technology behind the systems!

RFID is a short form of radio-frequency identification. It is part of a bigger group of technologies called as Automatic Identification and Data Capture (AIDC). AIDC means automatic collection of data and information and processing of that information in different systems.

Barcodes are similar to RFID and also part of AIDC. However, there are certain advantages of using RFID as compared to barcodes.

How is RFID different than Barcodes?

RFID has certain advantages as compared to the barcodes which makes it ideal for most of the applications.

No line of sight: RFID doesn’t need line of sight, whereas barcodes needs to be aligned within the scan area of a scanner.
Multiple items in one go: RFID can process multiple items in one go, whereas barcodes can only do one item at a time.
Longer read range: RFID tags can be read from a longer distance as compared to a barcode tag. Some RFID tags can be read even from over 10 meters.

All these things work in making RFID the best application system in AIDC. But there are certain limitations to RFID as well. e.g. technically, RFID has got a problem with metal and liquids. The performance of RFID tags degrades immensely while in vicinity or direct touch of liquids or metals. Further RFID system is still costly as compared to a barcode based system.

An RFID reader, also called interrogators, is the brain of the RFID system and is main control box of any system to function. Readers are devices that transmit and receive radio waves in order to communicate with RFID tags. There are broadly two type of readers: fixed readers and mobile readers.

Fixed Readers: stationary readers which are fixed at a particular location, like tolling readers. Mobile Readers: which can be moved from one location to another, like mobile stock taking readers.

RFID Antenna is the real thing in the RFID system which converts RFID reader signals to Radio Frequency waves which are able to track and communicate with the RFID tags which are in the range of that RF wave.

An RFID tag consists of two parts – an antenna for transmitting and receiving signals, and an RFID chip (or integrated circuit, IC) which stores the tag’s ID and other information. The tag is also composed of a protective material that holds the pieces together and shields them from various environmental conditions. RFID tags are affixed to items in order to track them using an RFID reader and antenna. The memory inside an RFID tag can vary from tag to tag.

LF has a primary Frequency Range of 125 - 134 kHz and the read range can be anywhere between a direct contact to about 10 Centimeters. Usual LF applications are Animal Tracking, Access Control, Applications with High Volumes of Liquids and Metals. LF works well near liquids & metals and following various global standards. But the problem with LF is its very sort read range. It also has a lower data transmission rate and is usually associate with high production costs.

HF operates in 13.56 MHz frequency and can produce a read range from direct contact to about 30 centimeters depending on the tags and readers used. Typical HF application are for library books, personal or corporate ID cards and multiple NFC applications. Mifare (ISO 14443A/B) & ICODE (ISO 15693) are global standards in HF. HF has a bigger ecosystem as compared to LF because of various global protocols & standards. Also HF comparatively has larger memory options. However it still has shorted read range as compared to UHF and the data transmission rate is still lower.

RFID systems have been around for some time but it is only recently that the system has become affordable and there are large scale implementations happening across the world. CELECT has been provding RFID systems for more than a decade now. We recommend usage of only High Frequency - HF system for Library automation system with our other allied application at LIBCON.

Vijender Pandita is Head of Technology at CELECT. He started his career as a software programmer and leads the Techno-commercial teams at CELECT currently.